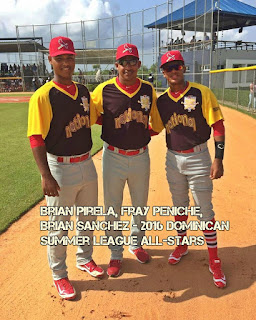 The Dominican Summer League Cardinals won their first three games on the schedule and lost the final two for this past week.  The Redbirds are 24-11 with a .686 PCT and are two games ahead of the second place Rockies.  They are 12-5 defending home and 12-6 (tops in the division) on the road.

July 11, 2016:  The Cardinals began the week hosting the Tigers in the second game of the series.  The Redbirds jumped out in front with four runs over the first two frames to the Tigers only one.  The Tigers plated five in the fourth but the Cardinals came back with two in the fifth and one in the seventh to take the contest.  Brian Sanchez walked and hit a two-run homer and Wadye Ynfante contributed with a single, double, and two RBIs.  Brian Pirela struck out four over two scoreless innings for the win.

July 12, 2016: The Angels visited the Cardinals in the second game of this report.  After exchanging zeroes in the first inning, the Halos put on on in the top of the second but the Redbirds capitalized on errors with five in the bottom half.  Both teams each plated two in the fifth and the bullpens took over from there with no runners crossing the plate in the final four innings.  Brian Sanchez singles, walked, and hit a three-run homer and Wadye Ynfante added a single, double, and two RBIs.  Enrique Perez and Cristhian Lugo combined for two strikeouts over the final three scoreless innings.

July 13, 2016: The Cardinals went on the road to face the Angels in the second game of the series and barely pulled it off.  The Halos scored first, in the second inning, but the Redbirds tied it up in the with a run in the third and took the lead in the fifth with another run.  The Angels plated three runs combined over the seventh and eighth innings to go up by two.  The Cardinals came back in the ninth with three to complete the sweep of the Angels.  Wadye Ynfante hit a solo home run in the third and Julio Rodriguez tripled and drove in one run.  Johan Oviedo made his professional debut by striking out five and allowing one run over three innings.

July 14, 2016: In the final series of this report, the Cardinals stayed out on the road to play the Brewers.  The Brew Crew was first to strike with two in the third and one in the fifth while holding the Redbirds out of the game for the first five frames.  The Cardinals finally scored in the sixth but ended up falling short by one run when the Brewers plated another in the seventh.  Carlos Soto singled, walked, and hit a solo home run.  Jesus Garcia struck out one over one scoreless inning to end the contest.

July 15, 2016:  The Cardinals welcomed in the Brewers for the second game of the series and looked avoid the sweep.  Neither team scored in the first three innings and both each plated one in the fourth.  The Brew Crew opened up the game with four in the top of the fifth.  The Redbirds tried to stay in the game with one in the fifth and two in the sixth, but the Brewers bullpen took over pitched three scoreless frames for the win.  Elehuris Montero singled, doubled, and drove in one run.  Enrique Perez held the bases loaded in the seventh and pitched another inning to follow.

July 17, 2016:  The American League hosted the National League for the 2016 All-Star game.  Brian Pirela and Brian Sanchez where both selected and also participated in the mid-season classic.  Sanchez struck out swinging in his first at-bat and singled to right field and scored in his second.  Pirela entered the game in the fourth facing five batters.  He struck out two, got one batter to ground out, walked a batter, and then induces a double play.  Fray Peniche and Erick Almonte were on the coaching staff.

Wadye Ynfante has reached base safely in 21 straight games which includes a seven-game hit streak.  The 18-year old right-handed hitter went 8-for-20 (.400) with two doubles, one home run, six RBIs (two w/two-outs), four runs, two walks, one sac fly, one stolen base, and three strikeouts.  He played three games in left field (one outfield assist) and two in center.  The February 10, 2014 free agent signing is currently tied for the team lead in doubles.

Brian Sanchez extended his on base streak to 19 games but had his hitting streak snapped at nine.  The 20-year old right-handed hitter went 5-for-16 (.313) with one triple, two home runs, five two-out RBIs, three runs, five walks, one hit by pitch, and four strikeouts.  He played all five games in right field and committed one fielding error.  The November 11, 2014 free agent signing leads the team in hits, runs scored, home runs, RBIs, total bases, OBP, SLG, AVG, and OPS.

Leandro Cedeno will look to continue his on base streak, which sits a six games now.  The 17-year old right-handed hitter went 5-for-16 (.313) with one double, one triple, two RBIs (one w/two-outs), two runs, one hit by pitch, and four strikeouts.  He played three games at first base (assisted in two double plays) and one as catcher (allowed three stolen bases).  The August 9, 2014 free agent signing is tied for the team lead in doubles and triples.

Carlos Soto has made it safely on base in all eight games played this season and that includes a three-game hit streak and walked at least once in his last six contests.  The 17-year old left-handed hitter went 4-for-13 (.308) with one home run, one RBI, four runs, six walks, and one strikeout.  He played three games behind the plate (one passed ball and threw out one of four base runners) and one as designated hitter.

Cristhian Lugo has turned things around from the start of the season and has now thrown seven consecutive scoreless appearances.  The 19-year old right-hander was called on for the July 12th contest and pitched one inning allowing one hit, no runs, and one walk.  He had a ground out-to-fly out ratio of 1-to-1.

Enrique Perez got back on track after a tough end to June.  The 18-year old left-hander made his first appearance of this report on July 12th and he tossed two scoreless innings while walking one and striking out another,  Then on July 15th, he pitched 1.2 innings only giving up one hit, no runs, and striking out on.  He had a ground out-to-fly out ratio of 4-to-2 and held all three inherited runners on base.  The February 25, 2014 free agent signing has pitched the most innings among the relievers.

Raffy Ozuna has struck out at least once in his last nine consecutive games and has not connected for a hit in his last three.  The 17-year old right-handed went 3-for-21 (.143) with three doubles, two RBIs, two runs, one walk, one sac fly, ten strikeouts, and one caught stealing.  He played four games at shortstop (assisted in two double plays and committed two fielding errors) and one as designated hitter.  The July 2, 1015 free agent signing leads the team strikeouts and errors.

Esequeil Delgado had has on base streak snapped at 21 games.  The 18-year old switch-hitter went 2-for-11 (.182) with two runs, one walk, one sacrifice, four strikeouts, and one caught stealing.  He played four games at second base where he assisted in three double plays and committed one fielding error.  The July 3, 2014 free agent signing leads the team in walks.

Diomedes Del Rio will look to end his five-game hitless streak and extend his four-game on base streak in the next week.  The 18-year old left-handed hitter went 0-for-11 (.000) with two runs, three walks, two sacrifices, one stolen base, and three strikeouts.  He played three games in centerfield (one outfield assist), one as designated hitter, and one in left.

Winston Nicacio has allowed five runs in his last two of three appearances and at least three runs over the last three.  The 19-year old right-hander started on July 11th and he coughed up four hits, five runs (three earned), two walks, threw two wild pitches, committed one throwing error, and struck five out over three and a third innings.  He had a ground out-to-fly out ratio of 4-to-2.  The November 6, 2015 free agent signing leads the pitching staff in walks permitted.

Diego Cordero hasn't pitched since June 24th and Francis Ventura since June 25th.  Carlos Luis has been out since July 5th and Andres Luna since July 9th.  Julio Rodriguez played in only one game on July 13th and Oscar Cotes on July 14th.

The St. Louis Cardinals finally locked down Cuban centerfield Jonathan Machado at $2.35 million per Jesse Sanchez.  Sanchez note Machado was originally a shortstop and is nicknamed Suzuki for a similar batting style to Ichiro.  He was assigned to DSL by the Cardinals.

Elehuris Montero is seventh in runs.

Esequeil Delgado is tied for second in walks.

Raffy Ozuna is tied for second in strikeouts.

Fabian Blanco is fifth in saves.

Brian Pirela is tied for third in holds.