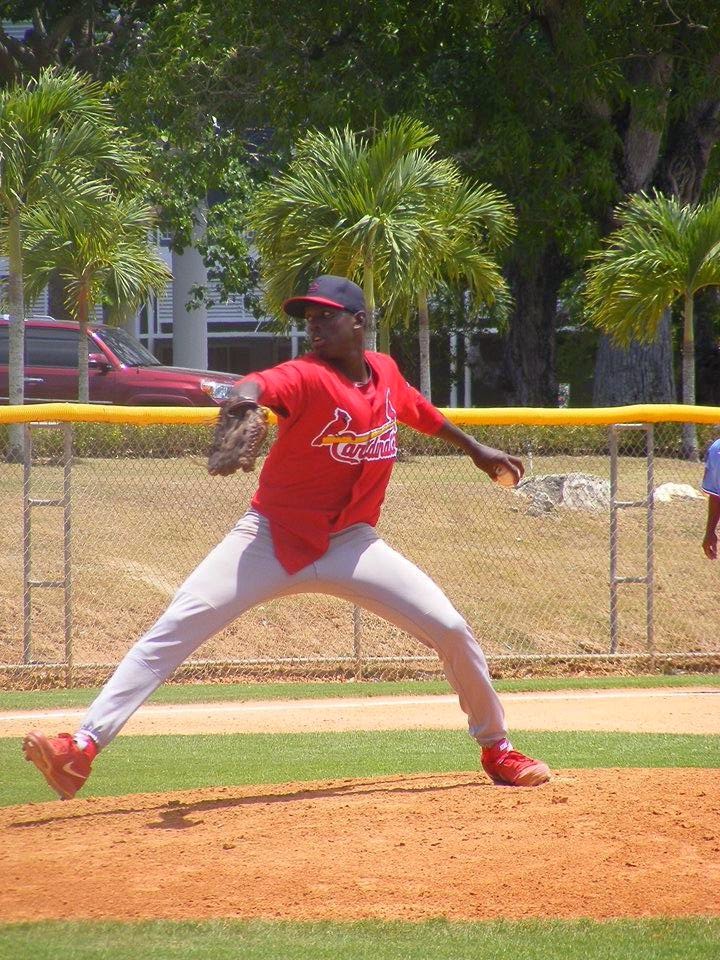 
The Dominican Summer League Cardinals had their losing streak extended to three games to start off the week, won one game, lost three more, and ended the week with a victory.  The club is 20-46 with a .303 PCT and are 27.5 games out of first place.  They have clawed back to a last place tie with the Reds Two club in the Boca Chica South Division.

The Cardinals hosted the Giants to open this notebook.  The Giants jumped out front scoring three runs over the first three innings.  Wadye Ynfante hit two-run homer in the sixth and the remaining hitters only added a couple more hits.  Enrique Perez and Kerrion Bennett combined to pitch four and two-thirds scoreless innings, to end the game, but still fell to the Giants 3-2.

The Cardinals visited the Giants in the second game of the two-game set.  Jonathan Rivera and Dennis Ortega drove in the first two runs to get the Redbirds on the board in the first inning.  On the hill, David Oca started and pitched six innings allowing five hits, one run, and struck two out.  Allen Cordoba knocked in the Cardinals' third run of the game in the fifth and went scoreless for the final four frames.  Rigobert Urena and Jose Lara finished of the contest with a combined three scoreless innings to help the Redbirds beat the Giants 3-1.

The Cardinals stayed out on the road to take on the Rockies in the third game of the week.  Jonathan Rivera got things started hitting a two-run homer in the first.  Tandem pairing Angel Estevez and Franyel Casadilla combined to to pitch seven innings allowing four hits, three runs, and struck five out.  The Redbirds managed to collected two more hits after the first inning as they fell to the Rockies 3-2.

The Rockies came to town in the second game of the series against the Cardinals.  The Redbirds did not return home as they only collected two hits, a double by Luis Flores and single by Jonathan Rivera, and didn't even get a free base off of a walk.  The make things worse the Rockies were hitting well, connecting for 14 hits and then scoring seven runs.  Kerrion Bennett was one of the bright spots of the game, pitching a scoreless frame frame in the ninth.  The Rockies easily won over the Cardinals 7-0.

The Yankees visited the Cardinals in the next contest.  The Redbirds received strong pitching from Junior Fernandez and Juan Alvarez who both combined for the full nine innings of work giving up seven hits and three runs.  The problem was the Cardinals sluggish bats as they had a whopping one hit and one walk the entire game.  The Cardinals were shutout for the second consecutive game as the Yankees won 3-0.  The Redbirds now have not scored a run in 26 innings.

The Cardinals went out on the road for the final game of this period against the Yankees, looking to end their losing and scoreless streak.  The Yankees jumped out in front in the first inning scoring two runs in the first inning but the Redbirds bats came alive in the top of the second.  The Cardinals sent the whole batting order to the plate in the second collecting three hits, four walks, and scored eight runs.  The offense was led by Jonathan Rivera with a two-run homer and Wadye Ynfante who tripled and drove in two runs.  The pitching started out slow but Junior Gonzalez calmed things down allowing one run over four innings.  Rigobert Urena and Enrique Perez finished off the game with three scoreless frames.  The Cardinals added three more runs in the final three innings and topped the Yankees 11-5.  The Redbirds hadn't hit or scored in the double digits since August 6th versus the Reds.

David Oca continued to be the anchor of the rotation, making this his third consecutive quality start for the team.  The 19-year old left-hander made his scheduled start on August 12th allowing five hits, one unearned run, one walk, threw one wild pitch, and struck one two over six innings for the winning decision (3-3).  He a had a ground out-to-fly out ratio of 8-to-5.  The December 10, 2012 free agent signing leads all starters in wins, ERA, and innings pitched and leads the team in strikeouts and WHIP.

Kerrion Bennett has not allowed an earned runs in his last six relief appearances.  The 18-year old left-hander pitched in his first game, of the period, on August 11th going two innings and allowing two hits, no runs, and one walk.  On August 14th, he didn't allow a hit or run over one inning.  The July 2, 2103 free agent signing had a combined ground out-to-fly out ratio of 6-to-1.

Rigobert Urena has not given up an earned run in his last four relief appearances.  The 19-year old left-hander first pitched on August 12th going two innings and allowing one hit, no runs, and striking out one.  His second game, of the period, came on August 16th as he gave up one hit, no runs, one walk, committed one fielding error, and struck out two for the winning decision (1-2).  The March 11, 2013 free agent signing had a combined ground out-to-fly out ratio of 3-to-4.

Junior Fernandez is slowly settling into the Dominican Summer League competition.  The 17-year old right-hander started on August 15th, allowing five hits, two runs (one earned), two walks, threw one wild pitch, struck out three, and assisted in one double play for the losing decision (0-5).  he had a ground out-to-fly out ratio of 6-to-2.  In his last two starts, the July 2, 2014 free agent signing has combined for 12 innings, 11 hits, four runs (two earned), two walks, and four strikeouts.

Wayde Ynfante collected one multi-hit game and has a two-game hitting streak to build on.  The 17-year old right-handed hitter went 5-for-21 (.238) with one double, one triple, home run, four RBIs (three w/two-outs), four runs, two walks, one hit by pitch, one sacrifice, two stolen bases, and seven strikeouts.  He played five games in left field and one in center.  The 2014 free agent signing is currently third on the team in stolen bases.

Jonathan Rivera collected a hit in four of his six games played and drove in five of the teams 18 runs scored.  The 17-year old right-handed hitter went 5-for-22 (.227) with one double, two home runs, five RBIs (four w/two-outs), three runs, one sac fly, four strikeouts, one caught stealing/pickoff, and grounded into one double play.  He played six games in right field committing one throwing error and had one outfield assist.  The November 5, 2013 free agent signing leads the team in hits, doubles, RBIs, total bases, and is tied for home runs.

Carlos Talavera has not had a hit in eight consecutive games and has seen his AVG dip below.200 on the season.  The 17-year old switch-hitter went 0-for-20 (.000) with two walks, one stolen base, and eight strikeouts.  He played six games in center field committing two throwing errors and had one outfield assist.  The July 2, 2013 free agent signing leads the team in triples, walks, strikeouts, and stolen bases.

Oscar Cotes has not had a hit in five straight games played.  The 17-year old right-handed hitter went 0-for-10 (.000) with one RBI, one run, one walk, and eight strikeouts.  He played three games at third base committing one throwing error.  The December 9, 2013 free agent signing has gone 4-for-29 (.138) with one RBI, five runs, three walks, and 19 strikeouts in his last ten games.

Joaquin De La Cruz has only collected one hit in his last eight games played.  The 18-year old right-handed hitter went 0-for-9 (.000) with three strikeouts.  He played two games at third base (assisted in one double play) and two at first (assisted in one double play).  The June 5, 2013 free agent signing has gone 4-for-38 (.105) with one RBI, one run, one walk, and 12 strikeouts over his last ten games.

Derian Gonzalez has struggled in three of his last four starts.  The 19-year old right-hander last only two innings on August 16th allowing five hits, three earned runs, three walks, and struck three out.  He had a ground out-to-fly out ratio of 1-to-0.  In his last four outings,  September 12, 2012 free agent signing has allowed 18 hits, 11 earned runs, ten walks, and struck out 19 over 15.1 innings (6.56 ERA).

Sandy Alcantara has given up one or more runs in his last six appearances.  The 18-year old right-hander tossed five innings on August 14th, giving up nine hits, four earned runs, two walks, threw one wild pitch, and struck three out for the losing decision (1-8).  He had a ground out-to-fly out ratio of 6-to-1.  The July 2, 2013 free agent has earned a loss in six of his last eight games pitched.

Luis Bandes, who has been out since July 16th, returned on August 14th going 0-for-3 with one strikeout.