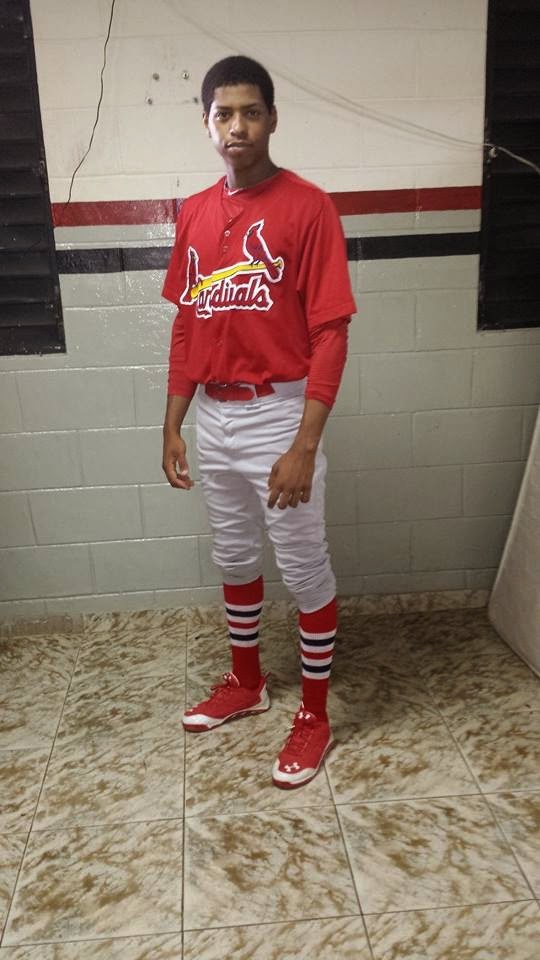 
The Dominican Summer League Cardinals had their losing streak extended to six games into this period.  The Redbirds ended that and did something they haven't done since the beginning of the season, claim three consecutive games.  The last time the Cardinals won two straight games came June 16-17 and three from June 2-4 and June 11-13.  The club is 15-27 with a .357 PCT, 14 games out of first place, and 13 games away from being eliminated from postseason play.  The Cardinals are still fighting to stay out of the basement, only two games up on the last place Reds Two club.

The Cardinals opened up on the road to finish off the two-game series against thew Orioles Two.  The Redbirds received stellar pitching from Will Changarotty, who had been struggling all season, and Oneiver Diaz.  Both combined to allow eight hits, two runs, one home run, two walks, and struck out nine.  But the issue wasn't the pitching for the Cardinals.  The Orioles pitching was just a tad bit better striking out 13 and holding the Redbirds to five hits and four walks.  Carlos Talavera reached base three times (single and two walks) but never crossed the plate as the Orioles shutout the Cardinals, for the third time this season, 2-0.

The Cardinals hosted the Reds Two club in the first of a two-game series.  The Redbirds quality pitching carried over from the previous game as David Oca, alone, struck out ten and allows two hits and one walk over six innings.  Juan Alvarez finished the game off pitching three scoreless frames.  The Cardinals offense poked it's head out and took advantage of the Red Stockings fielding miscues and three wild pitches.  Luis Bandes single twice and drove in two runs and Allen Corodoba collects a couple singles and knocked in one run.  The Redbirds ended their losing streak at six, shutting out the Reds Two 7-0.

The Cardinals went out on the road to face the Reds Two in the second game.  Both teams started off strong from the mound, tossing three scoreless frames.  The Redbirds were the first to strike as Luis Bandes hit a solo home run in the fourth.  The Reds put two on the board in the fifth and knocked Junior Gonzalez out of the game.  The Redbirds held the lead at 3-2 for another three innings, with the help of Enrique Perez in relief.  The Red Stockings tied the game up in the bottom of the ninth to send the contest into extras.  Bandes doubled in two runs and Perez pitched a scoreless inning to end the game at ten frames as the Cardinals won 5-3.

The first-place Red Sox welcomed in the Cardinals for the final two-game series before the All-Star break.  Freshly named All-Stars Derian Gonzalez and Jonathan Rivera lead the way for the Redbirds in this game.  Gonzalez opened up with four scoreless frames while Rivera singles, doubles, and drove in three of the Cardinals' four runs.  Andres Luna doubled in the other run in the second.  The Red Sox were able to get one run across the plate in the fifth but Andy De La Cruz pitched the final three frames and kept them off the scoreboard.  The Redbirds extended their winning streak to three games with a 4-1 victory.

The Red Sox visited in the next game, looking for revenge on a home loss against the Cardinals.  The Sox kept the Redbirds off the scoreboard for the first six frames as they pounded on their pitching staff. The Cardinals threw out four pitchers but could not stop the bleeding as the Red Sox tacked on three runs in the third, four in the sixth, two in the seventh, and an exclamation point with one in the eighth.  Henry Alvarado singles twice and drove in one run but the Cardinals were too far out as the Red Sox won 10-2.

After having Saturday off, Jonathan Rivera and Derian Gonzalez headed off to the Cleveland complex for the 2014 Dominican Summer League All-Star game.  The National League took the midsummer classic 9-7 over the American League, scoring four of their runs in the eighth inning.  Rivera pinch hit in the eighth and stayed in the game to man right field.  He flew out to center field in his only at-bat, after a wild pitch.  Gonzalez came in to pitch the eighth.  He didn't last long as he walked one batter and hit the next, before being pulled.

Henry Alvarado will look to extend his five-game hitting streak into the next week.  The 18-year old right-handed hitter went 6-for-16 (.375) with one double, two RBIs (one w/two-outs), one run, three strikeouts, and grounded into one double play.  He played four games at first base, assisting in six double plays.

David Oca had his best start of the season this past week.  The 19-year old left-hander started on July 15th pitching six scoreless innings striking out ten while allowing two hits, one walk, and throwing two wild pitches for the winning decision (2-2).  He had a ground out-to-flu out ratio of 7-to-0.  The December 10, 2012 free agent signee leads the team in WHIP and tied for innings pitched, and ranks second in strikeouts.

Oneiver Diaz had his best pitching appearance in the past week.  The 17-year old right-hander was called for relief on July 14th and he pitched four scoreless innings and only allowing three hits, one walk, while striking out a season-high six batters.  He had a ground out-to-fly out ratio of 2-to-1.  As a reliever, the November 5, 2013 free agent signee, has struck out 11, walked three, and given up three runs over 11.2 innings this season.

Angel Estevez bounded back from a rough spot start in the lase period.  The 17-year old right-hander was called on for relief on Jul 16th and he pitched three and two-thirds hitless/scoreless innings, striking out one and walking another.  He had a ground out-to--fly out ratio of 2-to-3.  As a reliever, the 2014 free agent signee, has pitched 11.2 innings giving up ten hits, two runs, five walks, and striking out six and earning three consecutive winning decisions.

Andy De La Cruz also bounced back from a tough outing in the last period.  The 19-year old left-hander tossed three hitless/scoreless innings, on July 17th, allowing one walk and struck out two for the winning decision (1-0).  He had a ground out-to-fly out ratio of 7-to-0.  The February 4, 2013 free agent signee leads the relievers in ERA and WHIP.

Luis Flores has only collected a hit in two of his last seven games and ended the week with a two-game hitless streak.  The 17-year old switch-hitter went 1-for-14 (.071) with one run, one walk, three strikeouts, one caught stealing/pickoff, and grounded into two double plays.  He played three games at second base, assisting in two double plays.  The November 5, 2013 free agent signee has gone 2-for-27 (.074) in his last seven games.

Carlos Rodriguez had his on base streak snapped at nine games and began a two-game hitless streak.  The 17-year old right-handed hitter went 1-for-9 (.111) with two walks and five strikeouts.  He played in one game at first base (assisted in one double play) and two in left field.

Joaquin De La Cruz has not collected a hit in seven consecutive games and is on a two-game on base streak.  The 18-year old right-handed hitter went 0-for-9 (.000) with one RBI, one run, five walks, one sac fly, and four strikeouts.  He played four games at third base, assisting in one double play and committing one fielding error.

Sandy Alcantara returned to action after missing 17 days with a sore finger.  The 18-year old right-hander started on July 18th, tossing his shortest start this season at three innings and allowing six hits, three earned runs, one walk, threw one wild pitch, and striking out two for the losing decision (1-5).  He had a ground out-to-fly out ratio of 4-to-1.  The July 2, 2013 free agent signee has picked up the loss in three consecutive games and leads the team in losses.

Junior Fernandez is still struggling as he adapts to the new level of play compared to what he was playing only a couple weeks ago.  The 17-year old right-hander was bumped to the bullpen and made his first relief appearance on July 18th allowing two hits, four runs (three earned), four walks, threw two wild pitches, and struck one out.  He had a ground out-to-fly out ratio of 4-to-0.  The July 2, 2014 free agent signing currently has a 0-2 record and 11.57 ERA while giving up 14 hits, 14 runs, seven walks, and striking out six over 9.1 innings.

Andres Luna is gradually being eased back into action after missing time with a biceps femoral injury.  He played in two games going 1-for-1 (1.000) with a double and RBI.

Jose Lara has not pitched since July 4th and Rigobert Urena since July 8th, both are dealing with illnesses.

Sergio Ripoll who has missed the entire season with a shoulder injury, may not play at all in 2014.