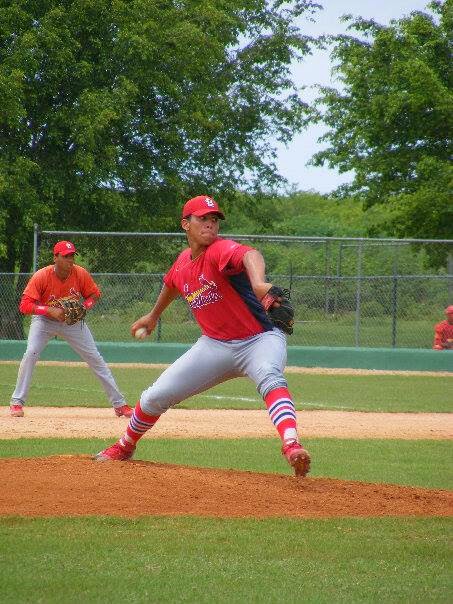 
The Dominican Summer League Cardinals managed to end their two-game losing streak, carried over from the previous period, and go on a five-game downward trend to end this week.  Since winning two consecutive games, on June 16th and 17th, the team has fallen all the way  into a battle for the basement in the division, only winning four of their last 22 games.  The club is 12-25 with a .324 PCT, 14 games out of first place in the Boca Chica South Division and are 22 games from being eliminated from postseason play.

The Cardinals opened this period up hosting the Mets One club for the second game of a two-game series.  Derian Gonzalez had a strong start for the Redbirds striking out nine and allowing two runs over six innings.  The Cardinals' offense took advantage of errors committed by the Mets to tack on five runs in the fifth, which included a two-run single by Allen Cordoba, to take a 5-1 lead.  Esteban Vallejo came on in relief to pitch the final three innings and held the Mets to just one run.  The Redbirds plated one more run in the eighth and ended their two-game losing streak with a 6-3 victory.

The Nationals visited the Cardinals for a two-game set.  The Nats struck right away with two runs in the first inning.  Oneiver Diaz was able to settle and keep the Nationals off the board for this next four innings.  The Redbirds tied the game up at three, scoring on errors and a couple wild pitches thrown by the Nationals.  However, the Nationals struck last with three more runs in the ninth to take the game at 6-3.

The Cardinals stayed out on the road to face the Mariners in the third game of this period.  The Redbirds were knocked out of the game after the third inning.  Angel Estevez was tagged with six runs, not that the errors didn't help out any.  The Cardinals hit the ball but could not turn anything into runs, grounding out into three double plays.  Jonathan Rivera did his part in hitting a solo home runs in the eight, but the team was already down 10-1 at the time.  The Mariners sent the Cardinals to their third consecutive loss with a 10-2 win.

The second game between the Cardinals and Mariners almost went the same way as the previous.  The first two Redbird pitchers were scored on seven times in the first five frames.  The Cardinals hitting took a couple steps back to six singles but did walk six times.  The Mariners pitching was solid and fielding was on point, with only one error, to take the game at a score of 8-1.

For the finale of this notebook, the Cardinals went on the road to play the Orioles Two club.  Jonathan Rivera drove in one run on a sac fly, in the first inning, for the Redbirds only run of the game.  Derian Gonzalez had another quality start for the Cardinals going five innings, striking out seven and allowing one run.  It was not enough as the Orioles' starting pitcher had a much better start, going all nine innings for the complete game two-hitter.  The Cardinals bullpen stumbled mid-game to cough up two runs and the Orioles went on to win 3-1.

Luis Bandes was able to bounce back from a rough week and collect three multi-hit games.  The 18-year old right-handed hitter went 7-for-17 (.412) with one RBI, one run, and three strikeouts.  He played four games in right field (one outfield assist and assisted in one double play) and one in left.  The July 2, 2012 free agent signee was the only offensive player to hit about .300 this last week and currently leads the team in home runs, SLG, and is tied for lead in doubles.

Carlos Rodriguez will look to extend his seven-game on base streak into thew next period.  The 17-year old right-handed hitter went 4-for-15 (.267) with two runs, three walks, one hit by pitch, one stolen base, and three strikeouts.  He played five games at first base assisting in four double plays.

Derian Gonzalez made two fantastic starts for the club this past week.  The 19-year old right-hander opened this period up on July 7th, pitching six innings and allowing four hits, two earned runs, one walk, threw one wild pitch, committed one throwing error, and striking out a season-high nine for the winning decision (2-1).  He then closed out this notebook on July 12th by giving up five hits, on earned run, two walks, hit one batter, threw one wild pitch, and striking out seven over five inning.  The Venezuelan had a combined ground out-to-fly out ratio of 10-to-6.  The September 12, 2012 free agent signee leads the team in innings pitched ERA (among starters), and strikeouts.

Franyel Casadilla is gradually turning things around after a handful of bad relief appearances.  The 17-year old right-hander was called on for the July 11th contest in which he pitched four innings of relief allowing four hits, one earned run, one walk, and struck three out.  He had a ground out-to-fly out ratio of 6-to-1.  The November 5, 2013 free agent signee has struck out six and only given up two hits, one earned run, and one walk over his last two appearances (6.1 innings).

Esteban Vallejo is beginning to turn things around after a horrible start to his season.  The 20-year old right-hander was called on for relief in the July 7th game and only allowed two hits, one earned run, four walks, and struck two over three innings to pick up his second save of the season.  He then appeared in the July 12th contest tossing one scoreless frame walking one and striking out another.  The Dominican had a combined ground out-to-fly out ratio of 2-to-4.

Hector Linares ended last week on a three-game hitless streak and has only connected for five hits in his last ten games.  The 17-year old right-handed hitter went 1-for-21 (.048) with one run, one walk, and eight strikeouts.  He played two games as designated hitter and two at shortstop (assisted in one double play and committed two throwing error).

Joaquin De La Cruz also ended last week on a three-game hitless streak and has collected a hit in two of his last eight games.  The 18-year old right-handed hitter went 0-for-7 (.000) with two strikeouts.  He played one game as designated hitter and one at third base.

Oscar Cotes has not connected for a hit in his last nine games played, going back to June 19th when he had three in one game.  The 17-year old right-handed hitter went 0-for-5 (.000) with one RBI, one run, two walks, and three strikeouts.  He played two games at third base (committed one throwing and one fielding error in one game) and one at shortstop.

Angel Estevez made his second start of the season and the results were near close to his first.  The 17-year old right-hander was called on for the start on July 10th and pitched four innings allowing seven hits, six runs (three earned), one walk, and struck one out for the losing decision (3-2).  He had a ground out-to-fly out ratio of 7-to-2.  As a starter, the rookie-DSL participant has given up 13 hits, 12 runs (eight earned), and one walk over seven innings.

Junior Fernandez is slowly adjusting to a new level of competition after signing with the organization on July 2, 2014.  The 17-year old made his second professional start on July 11th, giving up five hits, five earned runs, one home run, two walks, hitting two batters, and striking out two over his shortest outing of three innings.  He had a ground out-to-fly out ratio of 5-to-1 and picked up his second losing decision in two starts this season.

Jesus Narvaez has not pitched since June 30th, as he is dealing with a minor injury.  The 17-year old left-hander expects to return soon.

Sandy Alcantara has been out of the rotation since July 1st with a sore finger and was dealing with sickness.  The 18-year old right-hander expects to start this week.

Jose Lara has been out of action since July 4th, Andres Luna since July 5th, and Henry Alvarado only played in one game this past week on July 9th.

Carlos Luis, after sitting out a week, finally ended his hitless drought with a single on July 9th.

The St. Louis Cardinals signed their fourth international free agent in Jery Then, on July 11th.  He is a 19-year old right-hander signed out of the MLB Dominican Republic Academy.  Then made at least one relief appearance striking out four, walking one, and allowing one hit over two scoreless innings.  He will report to Short-Season Rookie-Level Gulf Coast League instead of the Dominican Summer League.  Then is said to have a fastball that touches the high 80s, curve in the mid-70s, and change-up in low 80s.