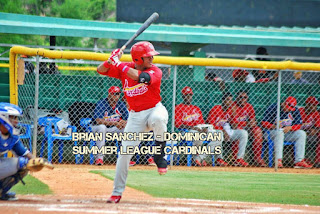 The Dominican Summer League Cardinals won their first game, lost the next, then won three straight before losing the finale for this period.  The team has a 4-2 record with .667 PCT and are tied for first in the San Pedro Division.  They are 2-0 at home and 2-2 on the road

June 4, 2016: The Cardinals opened the 2016 season hosting the Rockies.  The Redbirds jumped out in front with two runs in the first and second.  The Rockies plated one in the third and the Cardinals added another five in the remaining innings.  Alvaro Seijas gave up the one run over four innings while Enrique Perez, Wilfredo Pereira, and Estailin Tejada combined for five scoreless frames to end the game.  Leandro Cedeno lead the way on the offensive end with a triple, homer, and three RBIs.

June 6, 2016: The Cardinal went on the road for the second game of a two-contest set with the Rockies.  Errors cost the Redbirds early as the Rockies crossed home three times in the first inning.  The Cardinals came back to take the lead scoring one run in the second and took advantage of a couple hit by pitches and walks in the sixth.  The Rockies added two more in the eighth and the Redbirds sent the contest into extras with one in the ninth.  Both clubs exchanged zeroes over the next two innings but the Rockies plated the winner in the 12th.  Brian Sanchez singles twice and drove in two runs.  Diego Cordero started and struck out five.

June 7, 2016: The Cardinals stayed out on the road and visited the Tigers.  Francis Ventura was nearly lights out, giving up one hit and no runs, but struggled a little with control as he hit three batters and threw one wild pitch.  Noel DeJesus relieved the final four frames and struck out six while only allowing one run.  Brian Sanchez ate up the bases with one single, one double, and three walks, and also drove in two runs. Dariel Gomez added one single, two doubles, and one RBI.

June 8, 2016 game was postponed as the Cardinals were scheduled to host the Tigers in the second game.

June 9, 2016: The Angels came to town to take on the Cardinals in the game following a day off.  Junior Gonzalez struck out five and allowed one run over four innings to start.  The bullpen scrambled a little after but Angel Rondon and Enrique Perez combined for four strikes out and no runs over the final two frames.  Leandro Cedeno singled, doubled, and drove in two runs and Irving Wilson added a single, double, two walks, and two RBIs.

June 10, 2016: The Angels welcomed in the Cardinals for the second contest and offenses exploded from both sides and fielding was questionable.  The Redbirds posted two runs in the top of the first but the Halos answered back with six in the bottom half.  The Cardinals countered with six over the third and fourth innings to take the lead.  The Angels however scored two in the fifth and three more in the seventh.  The Redbirds took the lead and win with five in the eighth.  Irving Wilson plated three runs and Brian Sanchez and Leandro Cedeno each contributed two.  Wilfredo Pereira was one of three pitchers not to earn a run with his two and third scoreless innings of work.

June 11, 2016:  The Cardinals finished this notebook on the road against the Brewers.  Both teams went scoreless until the fourth when each exchanged two runs.  The Redbirds posted two in the fifth but the Brew Crew plated five in the bottom half and decider of the game.  Brian Sanchez singled, doubled twice, and drove in four runs and Angel Rondon struck out five over three scoreless innings.  Enrique Perez also came through with a couple scoreless frames in the loss.

Brian Sanchez has reached base safely in all six games played, including five multi-games.  The 20-year old right-handed hitter went 12-for-23 (.522) with four doubles, one home run, 12 RBIs (five w/two-outs), eight runs, even walks, one hit by pitch, one sac fly, and four strikeouts.  He manned right field in four games, one in centerfield, worked both for one, and committing two throwing errors.  The November 11, 2014 free signing leads the team in AVG, OBP, SLG, OPS, hits, doubles, RBIs, and is tied in home runs and total bases.

Leandro Cedeno began the season with a five-game hitting streak, but ended in final of this notebook.  The 17-year old right-handed hitter went 9-for-32 (.281) with three doubles, two triples, one home run, eight RBIs (two w/two-outs), seven runs, six strikeouts, and grounded into one double play.  He played two games as designated hitter, three at first base (assisted in one double play, and one as catcher (one passed ball and allowed one stolen base).  The September 9, 2014 free agent signing leads the team in triples and tied in home runs and total bases.

Francis Ventura tossed the best start by any of the Cardinals hurlers this week.  The 16-year old right-hander started on June 7th, allowing one hit, no runs, one walk, hit three batters, and struck four out for the winning decision (1-0).  He had a ground out-to-fly out ratio of 7-to-0.  The August 3, 2015 free agent signing leads the starting rotation in ERA and WHIP.

Enrique Perez, the 2015 DSL Reliever of the Year, picked up right where he left off last season with three scoreless relief appearances.  The 18-year old left-hander made his 2016 season debut on June 4th, tossing two hitless/scoreless innings and allowing one walk and striking out two for the winning decision (1-0).  He pitched in his second game on June 9th, giving up one hit, no runs, and striking out one.  The Colombian's final appearance for the week came on June 11th, tossing two scoreless innings and allowing one hit, one walk, and struck one out.  Perez had a combined ground out-to-fly out ratio of 6-to-4.  The February 25, 2014 free agent signing currently leads all relievers in ERA and innings pitched.

Angel Rondon threw two solid relief appearances this period.  The 18-year old right-hander made his professional debut on June 9th, tossing one scoreless inning with one walk and one strikeout.  His second game was extended to three innings on June 11th, as he didn't give up a hit or run, walked two, and struck five out.  He had a combined ground out-to-fly out ratio of 4-to-1.  The January 6, 2016 free agent signing is one of two pitchers to not allow a hit and run and leads all relievers in strikeouts.

Oscar Cotes is off the a very slow start, much like the 2015 season.  The 19-year old right-handed hitter went 1-for-11 (.091) with one run, three strikeouts, and grounded into one double play.  He played one game at first base, one in right field, and shared third base and right field in another, and committed one throwing error, one fielding error, and assisted in one double play.

Elehuris Montero connected for two multi-hit games, but went hitless in four and struck out at least once in the final five of this period.  The 17-year old right-handed hitter went 2-for-24 (.083) with one double, one triple, one RBI, ten runs, six walks, one hit by pitch, nine strikeouts, and grounded into one double play.  He played all six games at third base, where he committed three throwing errors and assisted in one double play.  The September 9, 2014 free agent signing leads the team in runs scored.

Winston Nicacio was given the welcome to pro ball in his debut.  The 19-year old right-hander pitched on June 10th and gave up six hits, five runs (three earned), two walks, hit one batter, and struck three out over 2.2 innings.  He had a ground out-to-fly out ratio of 3-to-1.

Cristhian Lugo had a hard time putting anything together in his three relief appearances to start the season.  The 19-year old right-hander made his 2016 season debut on June 6th, where he allowed the inherited runner to score, one one hit, and lose the game.  On June 9th, he pitched one inning allowing two hits, two runs (one earned), one walk, and struck one out.  Lugo finished up this period with a June 11th inning and a third and coughed up five hits, five earned runs, one home run, two walks, and struck one out.  The July 7, 2014 free agent signing had a combined ground out-to-fly out ratio of 5-to-1 and let one of three inherited runners score.

Edwar Ramirez made the move from bullpen to starting rotation and the change wasn't pleasant.  The 18-year old right-hander started on June 10th and only lasted 1.2 innings before seven hits, six runs (five earned), one walk, two hit by pitches, and one strikeout took hit out of the game.  He had a ground out-to-fly out ratio of 3-to-0.

Wadye Ynfante joined the DSL club, on June 11th, after trying to present a case in extended spring training.

Jesus Navarez was released over the offseason, Virgilio Encarnacion was cut loose by the Orioles after a failed PED test, and Isaac Silva was given his walking papers by the Brewers after the 2015 season.

Hector Linares was placed on the suspended list to open the 2016 season.

Elehuris Montero is first in runs scored, tied for seventh in triples, and tied for eighth in strikeouts.

Dariel Gomez is tied for sixth in doubles.

Julio Rodriguez is tried for seventh in triples.

Carlos Luis is tied for seventh in triples.

Esequeil Delgado is tied for third in walks.

Raffy Ozuna is first in strikeouts.

Andres Luna is tied for tenth in caught stealing.

Cristhian Lugo is tied for tenth in runs allowed.

Francis Ventura is tied for first in hit batters.

Brian Pirela is tied for second in holds.