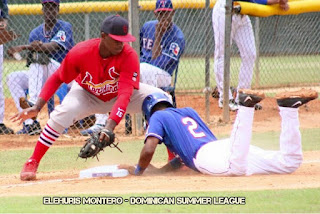 The Dominican Summer League Cardinals opened up the 2015 season losing their first game, then won two in a row, lost three straight, and ended this period with a victory.  They have a 3-4 record and are tied for sixth place in the Boca Chica South Division, only two games out of first place.

The Cardinals opened up the 2015 season on the road against the Rangers One.  Oneiver Diaz started off the new year much like he ended it last.  Diaz pitched a rain-shortened complete-game of five innings only allowing three hits, one unearned run, one walk, hit two batters, and struck one out.  Rangers also countered with top pitching performance and held the Redbirds offense out of the game.  Carlos Rodriguez came threw with the only hit, a single, for the Cards but also committed the error that gave the game away.  Rangers shutout the Cardinals 1-0.

The Cardinals looking for revenge, hosted the Rangers One team in the second game.  Estarlin Arias, returning from injury, started and struck out four over four scoreless innings.  Ronald Medrano followed with three scoreless and two strikeouts.  The Redbirds offense got off to a little better start as Wadye Ynfante doubled and scored on Elehuris Montero single in the first and Sanel Rosendo reached on a passed ball strikeout then scored on an Edwin Figuera single.  Cardinals ran into some trouble in the late innings but held on for a 2-1 victory.

The Cardinals headed out on the road to face the Mariners Two in a two-game set.  David Oca was solid through five innings as he struck out nine (team total of 15) and held the M's to two hits and one run.  The offense was slow to get going but took hold in the fourth and fifth innings with six total runs over both frames to take a 6-1 lead.  The Redbirds would plate another two runs in the top of the eighth.  Wadye Ynfante doubled twice and drove in two runs with Hector Linares adding a single, double , and three RBIs.  Mariners Two made a late run in the eight scoring five runs in the bottom of the eighth, but the Cardinals held on for the 8-6 win.

The Cardinals looked to extend their two-game winning streak hosting the Mariners Two.  Junior Gonzalez and the defense struggled early giving the M's a 3-2 lead after three frames.  Elehuris Montero hit the Redbirds first home run of the season, a solo shot in the first inning.  Luis Flores and Wadye Ynfante, also in the top of the order, drove in the other two runs for the Cards.  Juan Alvarez followed Gonzalez, and shut down the Mariners' offense with four scoreless innings with only one hit.  However the M's scored in the top of the ninth and ended the Cardinals winning streak with a 4-3 victory.

The Angels visited the Cardinals in the next contest for a two-game series.  The Redbirds offense got things started with three-consecutive doubles by Elehuris Montero, Carlos Rodriguez, and Irving Wilson that plated two runs on two outs in the first inning.  Franyel Casadilla coasted through the first three frames and was hit hard in the fourth and was knocked out in the fifth on five runs.  The Redbirds offense went silent and struck out ten times compared to five hits and five walks in the game.  Fabian Blanco finished off the contest with two scoreless innings as the Cardinals went down 7-3 to the Angels.

The Cardinals went on the road to face the Angels and saw some of the same results as the previous game.  Oneiver Diaz was not able to replicate the opening day start and gave up eight hits, three runs (including a home run), and two walks over five innings.  The Redbirds offense was silent until the sixth when a couple errors and a two-run homer by Elehuris Montero put the team on the board.  Dennis Ortega added another run in the ninth and Will Changarotty extended his scoreless streak for the season to two and a third innings.  Angels went on to win 7-3 over the Cardinals, making it three straight losses for the club.

For the finale of this report, the Cardinals hosted Astros Orange for the first of a two game set that will continue on Monday.  Both teams were scoreless through the first three innings and Cardinals struck first as Brian Sanchez and Leandro Cedeno reached on singles and Sanel Rosendo drove them in on a double.  With a 2-0 lead, Ronald Medrano cruised through five scoreless only allowing two hits and striking out three.  Medrano's tandem partner Estarlin Arias gave up the lead as the Astros scored a run in the sixth and tied it up in the seventh.  The bullpens for both teams held the tie until the 12th when the Redbirds made a few substitutions and received a free run on a bases loaded walk.  The Cardinals extended the Astros losing streak to seven games on a 3-2 victory.

Elehuris Montero currently has a five-game hitting streak and hit the first two home runs for the Cardinals this season.  The 16-year old right-handed hitter went 6-for-23 (.261) with one double, two home runs, four RBIs (three w/two-outs), four runs, one walk, six strikeouts, and one caught stealing/pickoff.  He played four games at third base (assisted in three double plays and committed one fielding error) and one as designated hitter.  The September 7, 2014 free agent signing leads the team in runs scored, home runs, total bases, and SLG.

Ronald Medrano threw two scoreless outings, one as a starter and one in relief.  The 19-year old right-hander was on the back half of the tandem on June 1st and pitched three innings allowing two hits, no runs, one walk, threw one wild pitch, and struck two out.  On June 6th, he opened and tossed five innings giving up two hits, no runs, one walk, hit one batter, and struck three out.  The August 18, 2012 free agent signing had a combined ground out-to-flu out ratio of 11-to-7.

David Oca picked up from where he left off last summer.  The 19-year old left-hander started on June 2nd, tossing five innings and allowing two hits, one earned run, and striking out nine for the winning decision.  He had a ground out-to-fly out ratio of 5-to-1.

Will Changarotty, making the complete move into the bullpen, had three scoreless outings under his belt for the week.  The 19-year old right-hander made his first appearance on June 1st, pitching one and a third, giving up two hits, no runs, two walks, and throwing one wild pitch for the save.  On June 5th, he struck out one and allowed one hit over one inning.  He topped things off on June 6th with two hitless/scoreless innings with two strikeouts.  The July 24, 2012 free agent signing had a combined ground out-to-fly out ratio of 3-to-3 and held both inherited runner on base.

Sanel Rosendo collected three hits in two games and struck out two or more times in four.  The 18-year old right-handed hitter went 2-for-22 (.091) with one double, two RBIs, two runs, three walks, one stolen base, and 11 strikeouts.  He played four games in right field and three in left.

Luis Flores began the week on and ended the week on a two-game hitless streak.  The 18-year old switch-hitter went 1-for-14 (.071) with one RBI, one walk, one sacrifice, and three strikeouts.  He played four games at second base (assisted in five double plays) and one as designated hitter.

Starlin Balbuena ended the period on a two-game hitless streak and struck out at least once in the final three contests.  The 17-year ol right-handed hitter went 1-for-16 (.063) with one run, one intentional walk, five strikeouts, and grounded into one double play.  He played all four games at shortstop, assisting in four double plays and committed two fieldin errors.

Dariel Gomez walked in each of the first three games but did not connect for a hit in any of the four played.  The 18-year old left-handed hitter went 0-for-11 (.000) with three walks, three strikeouts, and grounded into one double play.  He played four games at first base, assisting in six double plays.

Franyel Casadilla was the only starting pitcher that coughed up four or more runs in an opening.  The 18-year old right-hander made in 2015 debut on June 4th giving up nine hits, five earned runs, one walk, hit one batter, struck four out, and picked one runner off for the losing decision.  He had a ground out-to-fly out ratio of 2-to-1.

Jesus Garcia, Jose Geronimo, Jesus Narvaez, and Carlos Luis all begin the season on the disabled list and Edwar Ramirez and Estarlin Tejada on the restricted list.

Crime and political unrest was one of a handful of reasons the Cardinals organization left Venezuela: Wall St Journal

Colombian Deimer Morelos, who attracted the attention of Tampa Bay and St. Louis with a 90 mph fastball, lost his leg in a police accident last summer.  He received help the get a prosthetic leg and will look to continue his baseball career: El Universal

Miss out on last summer....here is a link to the Cardinals Best News Links Dominican Summer League 2014 season

Edwin Figuera is tied for tenth in triples.

Elehuris Montero is tied for third in home runs.

Sanel Rosendo is tied for fourth in strikeouts.

Oneiver Diaz is tied for first in losses, tied for seventh in innings pitched, and seventh in hits allowed.

Will Changarotty is tied for fifth in saves and tied for tenth in game finishes.

Frendy Gavin is tied for fifth in saves.

Enrique Perez is tied for fourth in hit batters and tied for first in holds.